Patrick Ford has been many places during his more than 30 years of working in economic development and city planning.

However, he said he’s never been in a place quite like Marion County.
Ford, 57, took over as Marion County’s new economic development director on Oct. 1, and he’s lived in Lebanon for only a few weeks. However, in that short time, Ford and his wife, Alecia, are quickly embracing their new role and their new community.
“We believe in this community,” said Ford. “We want to be right here. This is the quality of life we want. We want to live in a Main Street community. It’s got all of those pieces.”
During the First Friday Forum at the David R. Hourigan Government Building, Ford said Marion County has a “very rich, colorful and storied history.”

“It’s a vibrant community,” he said. “I could feel the energy. What we also learned, ever since we got here, it’s a community with endless capacity and endless compassion. We felt that.”

“I’ve never been in a community where our family has been physically touched by so many people,” he said. “Something happens to us every day that reinforces two things: it is the people in this community that make this place unique, and number two, people weren’t kidding when they said it was the people. We’ve experienced that every day.” 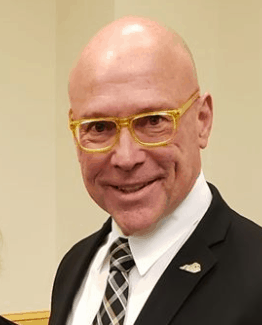 Ford has traveled many miles to find his new home in Marion County. Ford began as a county planner in Albemarle County, Virginia. After roughly six months, he left that job to join the Cox Company, a consulting firm. Ford then moved to Baltimore, Maryland, where he worked for Whitney, Bailey, Cox & Magnani.

In between serving for Mayors Murphy and O’Connor, Ford left Pittsburgh to serve as the director of zoning for Pompano Beach, Florida for about a year and a half, though he eventually returned to Pittsburgh.

After leaving Pittsburgh, Ford served as the town manager for Wardensville, West Virginia, a town of approximately 250 people. At the same time, Ford was also an independent consultant, and he was also the county planner for Hardy County, West Virginia.

In 2009, Ford became the executive director of the Business Development Corporation of the Northern Panhandle (of West Virginia), serving there until this year.

Ford is a graduate of the University of Virginia, where he earned both a bachelor’s degree and a master’s degree in city planning in the School of Architecture.

Ford also played football at Virginia for two seasons. Ford was on the 1984 University of Virginia football team that defeated Purdue 27-24 in the 1984 Peach Bowl. Ford said playing college football was a childhood dream of his.

While Ford, who is from Hutchinson, Kansas, won’t say he’s seen everything, he does say he has seen quite a lot, considering the fact he has worked for cities with populations ranging from 250 residents to 300,000 residents.

“What’s benefited me from that is that I’ve gotten my hands dirty,” he said. “When you work for a town of 260 people, you’re going to get your hands dirty. When it came to public works, I mowed the grass. When someone’s sewer line got clogged, there were times I’d go out there with my police chief, and he and I were pulling up a sewer pump, getting our hands dirty, and that’s just what you did. On one hand, it’s very humbling. On another hand, it’s very rewarding. You know how things work. When you see policies being implemented at the top, you see how they’re carried out. That not only made me a better professional, but it made me a better person.”

To Ford, economic development comes down to data and sales.

“You got to know the data, and you got to be able to sell,” he said. “If you don’t know the data and can’t make a pitch, you shouldn’t be in this business.”

Ford also feels that Marion County is set up for success when it comes to economic development.

“What was evident to me is that you’re at a unique confluence of modern manufacturing, small business, educational institutions, workforce, elected officials, community action agencies, arts and tourism,” he said. “You’re all working toward the same end. Quality of life. Expanded tax base so we can provide the amenities and public services that are necessary to attract more business, more people, more tourists, and at the end of the day, we need to sustain that.”

Ford takes over for Tom Lund, who announced his retirement earlier this year after 27 years as economic development director. Lund has assisted Ford in transitioning into the new position.

“It’s a blessing to have someone like Tom Lund still here to work with,” Ford said. “Tom has been fantastic to help get me caught up on the projects that are underway, help show me the lay of the land, introduce me to people that we’re going to be collaborating with. That is invaluable. So many other jobs, you walk in, and there’s just a desk and a pen, and you got to find things out on your own. It’s a blessing to have Tom wanting to stick around to help me out.”

Ford said he will work to gain an understanding of the local labor supply and industries located in Marion County.

When it comes down it, Ford is excited for his newest opportunity, as well as his newest home.

“I’m ready to hit the ground running,” he said. “There is one thing about this job. You got to keep the foot on the gas. The only thing that’s missing in this community are knights and princesses, because make no mistake, this place is Camelot.”

Some of our Top Employers